We’re not in Singapore anymore!
« Previous Entry | Next Entry »
Posted by Jessica Royals from on Monday, 25 June 2007

Beep! Beep! Beep! Groggily I roll over in the dark and squint at the clock. 6:01 AM. An early start. I stumble out of bed, wash up, and get dressed (rather conservatively I might add) and haul my suitcase to the steps of PGP where the coach is waiting. As the inertia of sleep wears off I get more and more excited. Today is going to be a big day. Look out Malaysia, here SEAS comes!

Less than three hours after departure the group has made it past two Immigration/Customs checkpoints and we are well on our way to the capital of Malaysia, Kuala Lampur. As soon as we cross the Straits of Jahor, the tiny body of water separating Singapore and Malaysia, there is a stark difference between the two countries. Whereas in Singapore the landscape is populated by high rise after high rise, rural Malaysia is nothing but green in every direction, speckled intermittedly by a few small homes. Our expert tour guide Eddie, a Malaysian citizen of Chinese descent, gives us some background on the region, from geography to demographics and local customs.

Our first stop along the way is Putrajaya, a modern construct of impressive government buildings and royal houses. The architecture here is breathtaking. Set along a bright blue waterway, the edifices blend key components of Islamic architecture such as pointed arches, voluminous domes, and graceful Arabic calligraphy and arabesques for ornamentation. This was not what I expected from Malaysia. To put it gently, from what I’d heard I envisioned it would be more “rustic” than this out of place and artificial city. It was a clear departure from the undeveloped and agricultural areas we passed while on the highway. The striking contrast between modern and traditional, luxury and squalor that I initially observed here would reoccur for the remainder of the sojourn.

By early evening we reached the day’s destination. Kuala Lampur. The grandeur of the king’s palace (think a tropical style Buckingham Palace armed guards and all) and the sheer verticality of the Petronas towers contrasted with the gritty, aggressive, and overwhelming atmosphere of Chinatown all leave me with a certain disquietude. Nothing yet that I’ve seen in KL is natural, comfortable, or clean—save the king’s precisely manicured lawns. By the next morning I am beginning to pinpoint the source of my unease about KL. A rather humbling visit with a few Non-governmental Organizations active in and around the capital illuminates some of the religious, ethnic, and socio-economic tensions that exist in this country. The very presence of these NGO’s signifies social discontent, exactly what I felt on the streets of KL late at night. Before I left for Malaysia, I was ready for a change of scenery from the environs of PGP and the NUS campus. Now I’m beginning to miss Singapore. This city is a little scary.

To my relief, the next two days present a complete contrast to the city. We ride into the night to Taman Negara National Park, a nature preserve in Malaysia’s rainforest. When the coach makes sit as far as it can, we dismount and travel across the Sembai Tembeling to our resort in tiny motor boats, carrying our luggage and all. Daylight revels the resort to be a charming collection of dark wooden bungalows, complete with a smattering of hungry monkeys, wild boars, tropical birds, geckoes, and the curious mousedeer. After the thrilling canopy walk high above the treetops of the rainforest, a strenuous hike to point Bukit Teriseki, and a languorous boat ride down the river, relaxation begins to set in. Only the whir of motor boat serves as a reminder of modernity in this far away emerald oasis. Everything here appears ancient, organic, and untouched. Reluctantly, we said goodbye to Taman Negara the next morning, just as the gray mist began to life from over the treetops. With that, the spellbinding beauty of the rainforest was lifted, and we were carried down narrow and bumpy roads to Malacca.

Traffic jam. UGGGGHH! En route to Malacca on the southwestern coast of the Malay Peninsula by way of KL we encountered midday congestion. The longer I sat in traffic, amidst a glimmering sea of cars and taxis the more I missed Taman Negara. Our reprieve from the hustle and bustle of the city and the impatient atmosphere was too short-lived. By dinner time our coach pilot had deftly navigated through the traffic and steered us right into the heart of Malacca. A colonial port city, rich with local color and European influence of the Dutch and Portuguese, Malacca has charm and character. The rhythm of the city was slower and calmer. Immediately, the group felt more comfortable here than in KL. That night marked the opening of an annual street festival in Malacca and our group decided to join in the festivities by celebrating Caroline Fisher’s birthday at a Portuguese restaurant, with cake and Spanish guitar included! Between dinner and souvenir shopping at the night market in close proximity to the hotel, that evening was the best night I had in Malaysia.

The next morning marked our return date to Singapore. Our stay in Malaysia was brief, jumping around from place to place, but I was glad to have a taste of life across the Straits. I think it afforded everyone a more realistic representation of South East Asia as a whole than does the cosmopolitan anomaly of Singapore. Even so, I was ready to go back to PGP, ready to recuperate from the busy schedule, ready to stretch my legs after hours of bus rides. Contented that I had opened myself up to new experiences and had visited new places I laid my head down on my pillow, conjured up the feelings of contentedness and peace I experienced on the boat ride and drifted off to sleep. 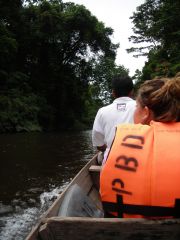 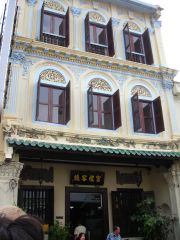 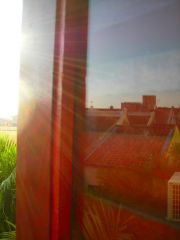