The 36 Hour Birthday
« Previous Entry | Next Entry »
Posted by Caroline Smith from Singapore on Sunday, 2 July 2006

On Tuesday June the 27th, I woke up at about 7:30 and I laid in my bed thinking, “Oh my gosh, I’m 19, that sounds so much OOooolder than 18” Then I saw some papers slipped under my door and I thought they could be cards or maybe something someone had dropped. I stepped outside and saw that my door was covered with toilet paper and happy birthday signs. I soon found out that the papers creeping under my door were part of my so called, “birthday carpet” and there was an assortment of broken brooms and dead “birthday plants” outside of my door too. It doesn’t sound like much, but it was really heart warming to be remembered.

Throughout the day people hugged and serenaded me and even came to see a cheesy Lindsay Lohan movie with me. I received a package from my parents and it was cookies that I got to share with everyone, so I felt popular, but maybe it was just the cookies. Also, Dan had been teasing me all week about my childlike excitement about my approaching day, but even he recognized it and wrote happy birthday on the board in class.

The whole day I felt really special, and I started thinking about the differences between nuclear families and circumstantial families. I haven’t been home for a birthday in a long time and despite the fact that my nuclear family is 10000 miles away I still felt loved.

All of the people on the SEAS trip have been blessed with this wonderful scholarship, survived the day-long flight to get here, tasted durian, prata, and chicken rice, visited HDB and Palau Ubin, etc. - and we’ve done it together- and that makes us a circumstantial family. Thanks to everyone who contributed to my very happy birthday!

In between class and the movies, I went to the library, but who wants to hear about that? I also thoroughly enjoyed the group activity that UNC alumna Mrs. Mary Ledbetter organized, which was going to a traditional Chinese tea house! Before this, I didn’t think I liked tea unless it was on ice and had a whole sugar cane inside. But the visit to the Tea house was really eye-opening.

Our Tea instructor was a perky middle-aged man named Vincent Low. He told us over and over that he used to be a successful banker, but for the past eighteen years he has owned that tea house. Now, he said, he is much more relaxed. His relaxation was conveyed through his happy-go-lucky jokes and smiling countenance.

We learned that there are only four types of tea: White, Green, Black, and my personal favorite Oolong. Of course, I had to like oolong because it is the rarest and hardest to find, as opposed to black which comprises 70 % of the world’s tea. We learned more and more about tea, where it grows, what part of the plant it comes from, the scents that are added to it, and the equipment used. Vincent was speaking the truth when he said that we would be tea experts after his seminar.

He jovially warned us about the repercussions of drinking coffee instead of tea, and he told us to sample responsibly because strong tea can have an intoxicating affect on novice tea drinkers. Mrs. Ledbetter said that he was afraid that would happen to us, so he gave us a big meal with our samples- both were delish.

After the tea house, some of us went to the movies at Tiong Bahru Plaza to see, “Just My Luck.” I don’t think anyone has touched on Singaporean movie theatres in the blog, so I will elaborate. They are basically the same as US theatres. The appearance is similar and they serve the same sweet savouries and greasy gourmets (ok not really gourmet.) But you know, popcorn, nachos, snowcaps, etc. Because Vincent hooked us up with such a large meal, I just settled for my Ginormous fountain Coke Light (A.K.A Diet Coke.)

One difference in Singaporean movie theatres is the assigned seating. You pick the seats you want and the prices are different according to how prime the seats are. The prices for the food are more than a hawker stand but still no 23 dollar box of gummy worms like in the states. I was really impressed with the price of the actual ticket- 7 Sing dollars = 4.67 US dollars!!! That’s about half price- woo-hoo!

The movie fulfilled my craving for a chick flick, but the birthday as a whole, did more than just that. I got treated like royalty, ate cookies, learned something new about tea, hung out with friends, and saw a movie. I really enjoyed the day and it wouldn’t have been the same without my SEAS family. 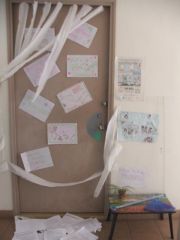 Everyone is mesmerized by Vincent and his tea knowledge 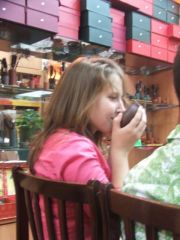 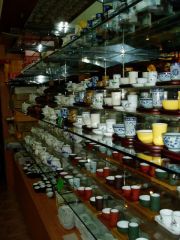 Bekah and the tea expert statue