Getting to know people
« Previous Entry | Next Entry »
Posted by Jessie Nichols from Singapore on Friday, 16 June 2006

For my home stay here, I was with Doris, a UNC Alum, along with Will and Kharmika. She graduated from the UNC School of Public Health about 20 years ago and has been living in Singapore with her husband and 2 children Andrew and Allison. Many students stayed with NUS students, some in private housing and others in HDB flats. Will, Kharmika and I got to see the experience of an American ex-pat living in Singapore. We had lunch in the American Club and Allison gave us a tour of the American School here.

In the theaters, Andrew and Allison took us to the movie “Paradise Now” that followed the lives of two Palestinian suicide bombers. It was a powerful film and we recommended it to the rest of the group when we got back. I have never been to a movie that was so somber and completely silent as people filed out.

After telling Doris we were interested in more local films, she recommended “Monsoon Wedding” and “Osama” which she owned. “Monsoon Wedding” was by female Indian director about a marriage in an Indian family with a strong focus on the female characters and their roles in their family and society. It touched on issues like love, arranged marriage, tradition, sexual abuse, and family bonds. “Osama” was by an Afghani director and told the true story of a widowed mother and her daughter living under Taliban control. They cannot go out in public without a male escort, so the daughter is dressed as a boy so that they can work. The movie website says that it was the first feature film made in the post-Taliban era of Afghanistan. One thing that I have really enjoyed here is the accessibility of local films and foreign films that I wouldn’t have seen in the States. As a class activity, we also watched two Singaporean movies called “The Homerun” and “I not stupid too”.

For me, one of the most interesting things about going to a foreign country is not just observing through my own personal experiences, but also getting to see how someone within a different culture views their own society. I am intending on majoring in Anthropology (and Environmental Studies) and being here has made me realize that you cannot just make assumptions about a culture by what you see. You have to talk to people, ask questions, and see how they view their own country. As an English speaking society, Singapore is a good place to start. A personal goal of mine while I am here is to step outside of my comfort zone and striking up a conversation with strangers (taxicab drivers are a great place to start). I have noticed people on the trip doing this more and more, and it has been very interesting to hear about their encounters as well, especially with such a wide range of viewpoints.

We have just completed the section on Singaporean history and society in our class taught by NUS faculty. Our teacher Dr. Quek Ser Hwee was born and raised in Singapore, and during the year she teaches history at NUS. Her class was a great introduction to the history of this island, as well as to certain social policies. She had a very humorous and satirical way of teaching that really gave some insight into the society.

It has also been interesting to see how people from different countries view Singapore. There is a large international community here and I would like to talk to visitors here as well as native Singaporeans. I have seen lots of Australian tourists here, as well as other Americans. Some of us went to CLE African Restaurant in Little India, which is owned by three Nigerians who get all the important ingredients from Nigeria. My Lonely Planet says that one was even a professional football player. After our dinner, one of the other customers started talking to us. His name was Azise and he and his friend James were here from Nigeria to buy some things to take back and sell. They said that a visa from Nigeria only allows them to come to Singapore for two weeks as tourists. I was not aware that countries restrict the duration of people’s visits to such a short window, so I would be interested in finding out what the time frame is for different countries’ citizens coming into Singapore. I also spoke with Michael and Caleb at the table across from Azise and James, both of whom were Nigerian as well. Caleb is here working for a company as a mechanical testing their products before they take them to Nigeria. Michael is here for two weeks, but is in grad school at a university in Canada. Singapore seems to advertise itself as a “hub”, perhaps from its history as a major port, so it has been interesting seeing it in this light.

I think one of the major adjustments for myself and probably a lot of the other students (especially since 24 of us are from North Carolina) has been the urban environment. I have found a few favorite places- like Little India and the tea shops in Chinatown- that I would love to spend more time in and explore more in depth. We have already been here nearly three weeks, and there is still so much more I would like to see. Singapore is such a small country, but they definitely cram a LOT onto this tiny island!

Doris (a UNC alum), her family, and me

The American School was just a short walk from their house. The Woodlands area is known for its large ex-pat community.

Allison took us to the Evolution Garden at the Botanic Gardens

About 90% of Singaporeans live in public housing, but non-permanent residents cannot buy a flat. Doris and her family lived in a private housing development. 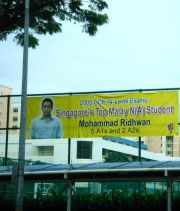 A banner congratulating a student on his grades.

Elby and me with Harris, an NUS student that studied at UNC last semester

View of the canal

Group shot after eating with the president of NUS